What is this urgency to define oneself? I get some of it: Defining yourself before someone defines you seems critical. There’s no shortage of people eager to negatively label you or prone to using derogatory epithets. As I meandered through colleges and work places up until my thirties, I was eager to come to some concrete definitions; now older, arriving at something conclusive doesn’t seem so important. However, you cannot get away from occasionally self-identifying for one reason or another. Hopefully, your chosen identity will be authentic and one you can lean on with pride. In the end, the process should be self-affirming and empowering or why go through this exercise at all?

I recently submitted work to a literary project and was asked if I wanted to identify as a person of color. The question made me pause, since, automatically, black and brown came to mind; I understand light-skinned Latinix (like me) and Asians often meet resistance when they call themselves people of color. Are we or are we not? Knowing a little history may help; for example: I rarely meet a “white” person who knows about the mix of enslaved African, nearly wiped out indigenous Taino, and European colonizer/settlers that blended over the centuries to produce Puerto Ricans–the near 3 million on the island and the greater diaspora in the U.S. and elsewhere. A white supremacist,  or minor league racist who actually knows the people’s history of the Americas, would find our “race” mixing disturbing. We would not be the kind their kids should know about other than to disparage. Then too: Many black Puerto Ricans choose “white” on the census. Many “white” Puerto Ricans deny any drop of blood that would color their family tree. Education, self-awareness, and enlightenment do not grow on anyone’s penned in family tree.

Yeah, I’m one of those who has come to view the concept of race as being more socially rather than genetically constructed; and so while I know how people deal with race matters, I like the idea of getting some distance from racial categories. Let me point out, I’m not one of those people who walk around saying I don’t see race either. This would just be crazy considering the history of Native American genocide and African slavery for a start. I’m wondering what the future will bring. Some day our racial genetic breakdown may be included on a bar code stamped on our young people’s foreheads; and we will all walk around with pocket-sized scanners, just so there are no misunderstandings before a first date. Or not. Can’t say race and culture aren’t fascinating to explore, especially now that the Black Lives Matter movement has had a major breakthrough in the U.S. About time.

As far as my submission application, I ticked off yes on the person of color question; and included the following in my bio: “He identifies as a Nuyorican with European, Middle Eastern, African, and indigenous Taino ancestry, who was raised in the South Bronx.” If this does not help define “American” during the culture wars we see unfolding right now, what will? Sad some will never be able to leave behind narrow racial and cultural visions of themselves and others, no matter what you say or show them; some would melt down into puddles without a steady diet of alternative facts.

It may help to keep in mind that some people just want someone to play with and love parades, no matter race or culture. So sure, let’s keep breaking down race and culture in useful ways;  but for now, let me call your attention to our unstoppable parade!  https://waragainstallpuertoricans.com/blog/   https://www.nprdpinc.org/ 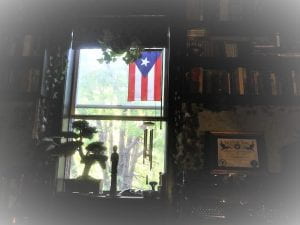 No perdido.
No soñando.

Bloodstones
Of my life
Have fed me
Along the way—

Made me ready for this
Recasting city—
Bedraggled and Masked,
Still happy to walk slowy
In the rain—
Now
In this
New body—

Being
Carved
As I Breathe
Deeply
Once more.

Not lost.
Not dreaming.

What a Silly Question

What does it mean
to be Puerto Rican?

Thank you for asking,
yet, what a silly question,
if you expect a concrete
finger-licking answer.

that makes you
run naked
on the shore
of imagination,
stopping only
to dance, sing
laugh, praise
this loving universe?

Of course, this is just
a tempting start.

For the unpacking
of our tragic history,
better we both sit down.


Until next time,
keep writing.