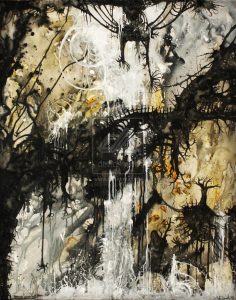 The U.S. is going through a dark time where we need poets who are good at writing accessible inspirational pieces: these poets remind us of the abundant resources North America and its people have to offer; they give us hope. I often envy the best of these poets; and yet, in spite of being motivated by envy and a hunger for hope, I am beginning to doubt my chances of joining their ranks at my age. I look at what is right with the universe (bringing belly laughs to the table!); yet, inevitably, turn to writing about what is wrong, and cynicism is a natural consequence of this turn. Meditation has not helped me here: I have not evolved to the point of accepting reality as it is and doubt I ever will; maybe it suits me best to rage against the dying of the light. Who knows why anyone is really wired the way they are?

One of the more egotistical critically thinking voices in my head is grateful for my old (albeit frayed) intracranial wiring. This voice tells me that there are plenty of kindred dark spirits roaming around that find how we are destroying ourselves and others outside our borders unbearable; we especially blame our so-called leaders and authority figures for perpetuating this downward spiral. We are surrounded by those constantly betraying our trust, from our local communities to our national institutions; we can easily abandon all hope once we enter our White House right now; name our last genuinely great leader in, or outside, of our national government.

Any attempt at immaculate inspirational poetry of gratitude will have to wait: today, I find little wrong with addressing the dark and disturbing—the dread. I will put aside whatever disappointment for not having the right inspirational stuff and, instead, satisfy myself with being just one more little messenger hoping to add to an also needed critical mass. 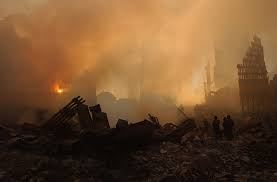 Hard as a Rock

That we would build here
on sacred ground,
on the souls of thousands
without holy rebellion—
build steely new towers
board rooms & toilets—
for businessmen & bankers
for thieves & sellers
of a lost North America
& destroyers of the world.

Not in Our Name was intentionally founded in 2002 to make the general population critically examine the events surrounding what happened on September 11, 2001—especially the ill-conceived U.S. military invasions that unfolded. The organization was endorsed by notable educators, writers, and activists. Not in Our Name prompted a fundamental personal question: what would I want done  if one of my family or true friends were killed that day? What would I want their legacy to be?

Who, by now, does not know that the lives horribly taken by mostly Saudi terrorists on 9/11 were used as a blatant excuse to occupy Iraq and Afghanistan for oil and corporate profits instead of going after the real network of assassins? Saudi Arabia is an oil-rich brutal dictatorship propped up by our U.S. government/military, in the service of elites and corporations; it is not to be touched. The recent dog-whistle war-mongering of our so-called leaders during 9/11 memorial speeches, after 15 years of destroying the lives of millions of people in Iraq and Afghanistan (hundreds of thousands of women and children), reduce us to soulless hypocritical butchers in the eyes of the world.

I have to believe that the sick cowardly circle occupying the White House does not represent most North Americans: there are no true scholars, spiritual leaders, or honorable warriors occupying that building. Most of the people I know genuinely want to be thoughtful and compassionate human beings and are willing to work at it; most people know the difference between a David and a Goliath, between noble self-defense of loved ones and starting endless wars filled with the rabid murder of innocent people at home and abroad. Conscientious objection is patriotism; it is not surrender.