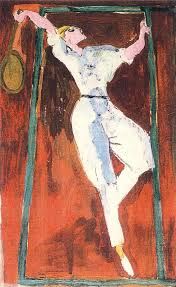 Warming Up
After seeing U.S. Open qualifying tournament matches at the National Tennis Center last week, I came home inspired and with a cold. Conflicting energies once again!—my life, my body, my tennis body with a life of its own.

The First Set: Games (6-4)
The first set wasn’t easy, but leading 5-4, my body, fearless, nimble, and quick, easily broke serve when it mattered for a strong 6-4 close.

The Second Set: Games (3-6)
A solid core with tanned muscular arms and legs played well to start the second set, but after countless strains and microscopic tears imperceptibly bled out for a 3-6 loss.

The Third Set: Games (6-6)
Just reaching 59 years old, in a precarious third set, my body has played erratically, breaking serve at times, only to be broken right back; losing serve and then taking the next game. The rain delays, missing umpires, injury timeouts, cracking more than one racquet against metal net posts in disgust (a teen habit never totally relinquished) only made playing more difficult.

The Third Set Tie Breaker (0-0)
My right arm was barely able to get around a wickedly spun first serve out wide to my forehand that took me off the court. A long reach, a flick of the wrist, and the ball rose high in the air, crossed the net, and landed in play.

In My Head
The most important point in a third set tie-breaker, other than the last one, could be the first, especially when a body has to be up on its toes with senses heightened to receive; I’m sure some bodies would smell and taste a serve coming if they could. Winning this first point gives a body the momentum—the psychological edge needed to confidently go after the next two points–to hopefully take that delicious 3-0 lead. When a player needs to reach 7 (with a two point lead) to win the breaker, an initial three point lead is huge!

Taking a 3-0 lead before chilly fall days would be ideal since freezing winter temperatures can be shocking to a body showing the signs of a lifetime of self-inflicted abuse. An aged body is no longer pink Silly Putty, easily kneaded and rolled-up into a ball that bounces on the court; the old body is now more clay; try bouncing a rolled up ball of clay on a hard court and see how much rebound you get. If it’s been sun-baked enough, you can expect shattering.

The idea is to take the pressure off, not stack it by falling behind; take a quick lead and run with it; my body wants the wiggle room of a few points just in case it misses a passing shot or gets a bad call. My body also knows the glorious feeling of winning a third set tiebreaker at 7-0. In reality, winning this tiebreaker at 7-5 or in marathon 22-20 numbers would be just fine if the match proves to actually be a five-setter. In this case, winning the first two out of three sets could be a beginning. Living fast and dying young has never made sense to my body.

Come back same time next year for the final score of this third set.