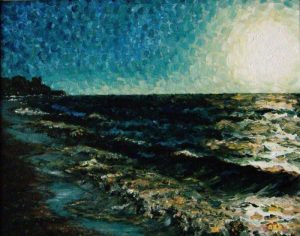 The New York City Puerto Rican Day Parade is on June 11th; but as a member of the island’s diaspora, I will find it difficult to celebrate, knowing of Puerto Rico’s twisted relationship with the U.S. and that the island’s government is going bankrupt because of it. My venting follows without supporting citations; so if preferred, skip this exorcism and scroll down to a relevant poem. In the poem’s endnotes, I mention a couple of highly praised books that should keep me from sounding like just one more conspiracy theorist; of course, nothing will stop the heckler armed with “alternative facts.” Supportive references and detractors aside, this brief personal essay is meant primarily for those who don’t know the sad history of Puerto Rico, as well as for those who do. The island is just a dot in a troubled world that, as dots go, remains neglected and misunderstood. Ultimately, I only wish for this beautiful little island nation to receive the critical analysis and care for its people that it deserves.

Robin in The Hood: Taking from The Poor and Giving to The Rich

No matter the many years of propaganda about Puerto Rico being blessed as a self-governing U.S. “Commonwealth,” it has never been autonomous but exploited instead. It is more widely known as “the world’s oldest colony;” and as we all know, colonization is not harmless: dig up Thomas Jefferson, his land-owning colleagues, and their people’s revolutionary guerrilla army to see how strongly colonial North Americans objected to it; for sublime hypocrisy, see how U.S. independence meant genocide for the Native American. Puerto Rico, known as Borikén by its indigenous population, was recognized early as a rich unspoiled resource, well-positioned for free trade with much of the world, and so it was invaded by the U.S. in 1898 when Spain could no longer defend it. Good bye free trade and the charter of genuine freedom Spain had granted Puerto Rico shortly before being occupied. Colonization 101: create self-serving fictions that enable the subjugation of a people; take their land; profit at their expense.

The U.S. government has never allowed Puerto Rico to manage its own affairs, especially in terms of economic policies that would benefit its people more than outside interests; instead, it has been brutally raped for the benefit of U.S. corporations and ruling class elites. The local government now bankrupt, the island is bleeding to death; as expected, Wall Street vultures (and other lovely assorted businessmen) and their lawyers are swooping in for pieces of the island’s desecrated body. As a Nuyorican who proudly sees his roots stretching back into the history of Borikén’s Native American, African, and Spanish cultures, it disgusts me to watch the carnage. Whatever economic benefits the U.S. has laid on the island, they have been little compared to the amount of wealth and human life extracted.

The calculated exploitation has gotten so bad that the island is experiencing a significant exodus and brain drain: people are leaving the island rather than sink with it. Regrettably, the corrupt class that has historically sold out the poor majority and working classes is sticking around; the most articulate of them continue to craft odes to the status quo and have buildings named after them. The strongest voices for resistance were silenced—to put it mildly—by the 1960s. The life-long imprisonment and crippling of Albizu Campos—our Nelson Mandela—should never be forgotten. This is the island’s history in a poison capsule its people is forced to swallow. It’s hard to believe how thousands of lives have been destroyed and what future generations have in store: if only knowledge led to courageous moral evolution.

Not everyone can sympathize with those who saw a never-ending U.S. military occupation for what it was and fought against it. As I write this, the NYPD Hispanic Society has pulled out of the Puerto Rican Day Parade because Oscar López Rivera, labeled a “terrorist” was recently released from prison after 36 years and is being honored as a “National Freedom Hero.” Rivera was not directly responsible for killing anyone, but was implicated in several deaths caused by a New York City restaurant bombing and charged with plotting to “overthrow the U.S. government.”

I cannot imagine the life-long pain that comes with losing totally innocent loved ones because of any political agenda; this would probably unravel me. However, I also know that the greatest killer—by far—of innocent men, women, and children has always been the occupying state—not the colonized. Like many, I wonder what options are left to a captured defenseless people who can only see humiliation and death ahead for themselves and their families. You have probably heard that one man’s terrorist is another’s freedom fighter; a study of U.S. and world history confirms this, but how many people actually learn about imperialism and state-produced terrorism?

So what can make things even worse for Puerto Rico? Please do not laugh: a U.S./P.R corporate and political cabal is destroying the island’s public education system from kindergarten to its historically rich university. How dare anyone read the right books or think beyond what is necessary to go into the service industry or work in a factory? This process should seem familiar since the corporate privatization of public schools has broken ground on the U.S. mainland. Puerto Rico has always been a test case for U.S. corporations and elites: unlike a strong full-grown Cuba, the island was simply too small, young, and isolated to keep from being overpowered and turned into a dependent welfare state. And you would think, like with every society colonized and economically enslaved by Western white powers, that the race of the victims matter.

I read Malcolm X believed that for capitalism to work you have to believe in the whites’ racism against non-whites. Looking at what is going on in Puerto Rico and recently re-watching Aristocrats, as well as Pasolini’s startling classic Salo: 120 Days of Sodom, reminds me again that Malcolm was close to the truth but wrong. The “owners” (as my Irish-American hero, George Carlin, called them) of the U.S. will abuse and screw their own into the ground whenever profits are at stake. I am reading Nancy Isenberg’sWhite Trash: The Four-Hundred-Year History of Class in America; and I assume it will unsettle anyone who believes in the inherent superiority of the capitalist white male and his cold-blooded objectivist siren Ayn Rand. True, it helps if the one you want to dehumanize and subjugate looks different from you—I really have to stop spouting clichés.

To be clear: The pale Spanish Conquistadors, mounted on their stallions and protected by layers of armor, were never my heroes; I was always more attracted to the native Tainos and Africans who were killed and forced into slavery by them and yet still fought back. So, sometimes when I hear the phrase “Que Sera, Sera” coming from a Latino or Latina, especially if they are white, it sounds repugnant. I can take it from others, say the glowing moon-faced Doris Day singing the phrase in the 1950s—what did she know back then?—and she was sweet with a pretty voice. I am happy her mother was finally given the privilege to vote and wear pants before dying. It is a good thing her mother did not try to wear pants in Puerto Rico. In 1919, Luisa Capetillo, a writer, anarchist, and one of Puerto Rico’s most respected labor organizers, challenged society by becoming the first woman on the island to wear trousers in public. Capetillo was put in jail for what was then considered to be a “crime.” I can look up to Capetillo. I have ridiculed my share of Puerto Ricans; but I can always hold in high esteem many more Boricuas—past, present, and those to come. Nationalism of any kind has never really left a good impression on me: whatever pride I have in a homeland, whether I think of the U.S. or Puerto Rico, has to do with looking at the lives of individuals in these places. When I go to the parade, because after writing this what else can I do, it will be to celebrate individuals—past, present, and those in the making who I know will do great things in the future—no matter how bleak it may look, not only for our island but for the U.S. and the world right now.

Yearning, he returned to a dirt road that snaked by fields,
abandoned plantations, palm trees, finally disappearing
in a lagoon. His corrugated tin-roofed shack sat atop stilts
on a stony plot of farmland fenced in by thin uneven slats
and chicken wire. Black-spotted mangoes hung from short
bushy trees; an orange-red rooster trotted around piglets;
little green lizards played tag on the brown outhouse doors;
the old goat with wise feminine eyes nibbled at the rope
that collared her. Behind a large screened porch window
Abuelo, shirtless, hunched over a sun-bleached workbench,
listening to an antique radio, smiled at me; his long gnarled
fingers rolling cigars…he would never get…to sell in town.

Notes:  Borikén is the pre-Columbian name given to Puerto Rico by its indigenous Taino people. Spain’s colony for 400 years, 8 days after being granted autonomy, it becomes a de facto colony of the U.S. after the invasion of 1898. Due to the island’s easy to occupy small size, it is ground zero for brutal experimentation and exploitation of every kind by what President Eisenhower first labeled the U.S. industrial/government/military complex. By 1960, U.S. Government subsidized corporations, banks, and ruling elites owned most of the island’s wealth producing land, resources—poor & working class were fully subjugated. The Puerto Rican Government is now bankrupt. Over 45% of the population lives below U.S. poverty line. On December 9, 2015, the GOP blocked a proposed bankruptcy bill that would allow P.R. to restructure its debt. Austerity schemes including cuts to public services and primary to higher education are being employed. Check my facts. Please read Nelson A. Denis’ War Against All Puerto Ricans and David Talbot’s The Devil’s Chessboard.

* A version of this poem first appeared in Acentos.

* This piece appeared in Counterpunch.