Since our last election day, except for a few poems, I have found it hard to develop new work. Like for many, trying to understand the transition of power to someone that more than half the country does not want as president has distracted me. Who can claim Trump has not divided the country and taken us back to a period of paranoia, hatred, and dread not seen since the middle of the Cold War years? And, he is just getting started!

Watching the Senate confirmation hearing for Secretary of Education, Betsy Devos, someone whose only qualifications for the post appear to be her billionaire politically connected status, work trying to privatize public education, and millions in donations to the Republican party, was sickening. Her imminent appointment, along with minority tokens Carson for Housing and Urban Development Secretary and a Chao for Transportation–set within exactly the kind of military/industrial complex ruled-government that our 34th president, Eisenhower, warned us about in 1961, reveals how easily we are still manipulated—except the stakes are now the highest that I have ever seen. Forgive me if I once again rehash old news.

The world is figuratively and literally hotter than it has ever been in my lifetime: and here, in Trump, we have someone who purchased and lied his way into the White House—someone that denies global warming and who does not seem to care that we are inexorably headed towards one nuclear catastrophe or another. We now have the perfect ad-man for our nihilistic zombie and end-of-days apocalypse movie youth culture. That race relations around most of the country are in shambles seems a comfortable diversion in comparison to our country’s metastasizing brain tumor: we, naïve children, bully and fight each other in public school playgrounds, while our supposed guardians and teachers watch at arm’s length—they happy to know that their own children are going to nicely segregated private schools; and the richest are going home to gated compounds and high rise buildings with private security, panic rooms, and underground bunkers. Do I exaggerate? I’ve heard things…once in our history we had an underground railroad to freedom; now we have a school-to-prison pipeline. Please do some earnest, as objective as possible, research of your own and prove me wrong. I dare you: the books, articles, history are all there at the click of an online link. Ooops: maybe I just said too much; do you know how ruthlessly the internet is censored in China and elsewhere around the world–how whistle blowers and the best investigative journalists are rounded up? Of course you do! So please join PEN AMERICA or PEN USA. What are you waiting for?

Let me end this rant by saying that if a home-grown terrorist, indeed, happens to make you literally sick, then he has won (of course a he…the shes will be marching to the White House in protest tomorrow). It takes someone who has lost touch with their humanity to not recognize the humanity of others. It really is demonstrably a sad hollow state of being; it is also extremely scary to see how quickly (sometimes boot camp-quick) we can all be molded to lose touch. Buddhist enlightenment is supposed to bring you to accepting reality as it is and fill your heart with compassion and love for everyone—no matter how deceived, miseducated, corrupt, or even evil they may be. I am clearly not a Buddhist, or free of sin, and light years away from enlightenment; but I am happy knowing that my meditation practice is stronger than ever and my dangerously high blood pressure is under control now because of it along with a vegetarian diet and cross-training. It seems to me that having a healthy body and peaceful lucid mind that will allow me to fully experience the impending crash with some equanimity seems like a pragmatic goal. Do I hear a perverse little voice inside of me asking that I thank Trump for his motivating shove; and how could I not come up with new poems in 2017?! This would be the least I could do to show my appreciation.

My poems may not be new for now, but I imagine they may still be appropriate for this very strange inauguration day. The H. Bosch images of hell never get old. 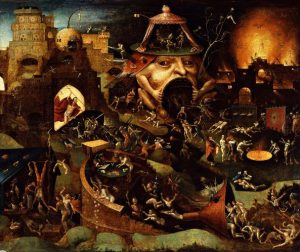 World Trade: Hard as a Rock

That we
would build
again
on this
same land,
without
rebellion,
concrete
steel
towers
to toilets
to board rooms
to bunkers.

Ashes in a Capsule: Fifty Cents

Practice bombs are falling on Vieques;
I shudder to think Hiroshima and Nagasaki.

In the Deep South during the height of Reconstruction
it was not uncommon to cut the black man or woman down
then celebrate around the naked burning figure–
the wild-eyed looks of hate, of satisfaction, of joy!
made for postcards spread North to terrorize the freest.

Practice bombs keep falling on Vieques;
I shudder to think Hiroshima and Nagasaki.

Late Watch done, I drop off McCambell, Del Pozo, and Singh
after crossing the Queens Borough Bridge this morning.
The drive home on the Grand Central Parkway is hazy rote.
As the distant city skyline falls back, a monstrous wound in
a towering twin spews black smoke into the atmosphere–
I wish the radio on my rusty `86 Cougar was working.

Home, before TV, the first plane strikes again, the next plane hits,
the great towers crumble…over and over again until the bottle
of gin is gone and sleep takes me out; I’m not sure when. Dreaming,
I find myself covered in ashes and crying, seeing a bent shadow
selling charred nails in a jar as souvenirs.

I have never been to Vieques, Hiroshoma, or Nagasaki.
My family comes from Puerto Rico, my wife was born in Japan.

Missiles level a sandy building housing a wasting child, mother,
and, yes, an angry young man squirming with a rifle, their flesh is found
in smoking debri. What is the real Desert Storm body count, who is counting
in Afghanistan? Now that our old Russian enemy’s Evil Empire has fallen,
our newly crowned commander and chief has coined an Axis of Evil.

Practice bombs are still falling on Vieques; people still live on the island.
I have been to Japan; my daughter and son visit their grandparents in Tokyo.

Hundreds of bodies are unearthed in the woods by a Georgia crematorium—
some mummified, some just weeks in the ground. Relatives had received
urns filled with powdered concrete. On the West Coast a crematorium owner
is found selling limbs and organs to researchers and pharmaceutical companies.

*After decades of island destruction and protests, the U.S. bombings
of Vieques ended in 2003. Much of the island remains toxic. 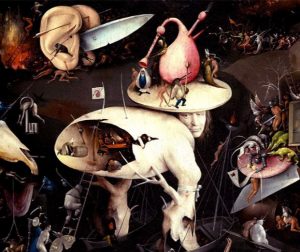 A fresh marshmallow
roasted with just
the right care
on an open fire, turns
a glorious black–
an even smoky
crematorium black.

It takes an acquired taste
to roast these sweet babies
to just the right hue–
to stoke the fire just right,
to turn the skewer just right.

So next time you see
smudges of coffin black
on someone’s fingers and lips
and a great big smile, please
hide your mallows…
we were raised this way. 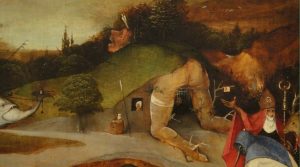 We, the people, are celebrating in the streets.
After nearly ten years, after the wars—
the million deaths and casualties of all sides,
after placing soldiers holding M-16’s
in Grand Central Station, after cutting U.S.
civil servant jobs and raising costs on necessities,
after losing the moral authority of America
in the eyes of nearly every country in the world,
after gasoline prices are higher than ever
and corporations own us, after The Haters
have exponentially multiplied from the handful
that planned and financed the changing of the world
(the actual mass murderers died on 9/11),
the President gave an order that ultimately
put a bullet over the left eye of Osama Bin Laden—
done by a handful of Navy Seals that received
no casualties. Hear the spinning USA! USA! Winning!

Until next time,,
keep writing.