*This article was picked up by Counterpunch for their June 4, 2018 issue. 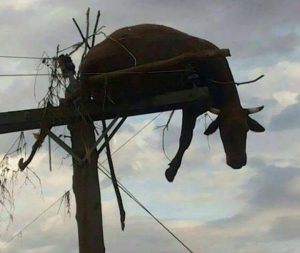 The dish of Ropa Vieja
I was served in Old Havana,
where tourists come to play,
was tough—was very tough—

was indescribably tough—
much like I remember eating
in the countryside of my island.

After visiting Cuba for the first time last week, I returned to New York City where my attention quickly turned to Puerto Rico: I heard that more than four thousand and six hundred people have died on the island in the aftermath of last September’s Hurricane Maria. It now looks certain that, as many have reported for months, the island government’s death toll figure of 64 was a blend of denial and fabrication. Such a gross discrepancy of facts implies an attempted cover-up by the P.R. and U.S. government. After days thinking about the censorship and struggles of people in Cuba, I suddenly felt guilty for not paying much closer attention to what was happening in my own ancestral home of Puerto Rico. For a moment I imagined living in a Communist Cuba was not so bad and felt foolish for having spent my time and money there showing “support for the Cuban people”,while my own (U.S. citizens!) have compromised and lost their lives because of U.S. domination for generations. Cuba is celebrating its independence having staved off nearly 60 years of overt and covert U.S. attacks and is slowly transitioning to a Communist/Capitalist socio-political arrangement, while Puerto Rico remains a subjugated and bankrupt U.S. colony—being devoured by U.S. elites and banks. The possibility of Puerto Rico existing as a sovereign nation has not been more out of reach. On my visit to Havana, I learned many Cubans have good reasons for still fiercely defending their revolution and pitying Puerto Rico.

Understand, when not getting my non-nationalistic Zen neutrality on, I often feel proud of being a born and bred North American U.S. citizen—but my deep empathic feelings for Puerto Rico and Latin America are hard-wired. Of course. These feelings are especially resonant with just a little knowledge of the horrific suffering Latin Americans, Cubans, and Puerto Ricans have endured for centuries because of savage U.S. government and corporate interventions. The degradations and senseless loss of lives have far outweighed any benefits politicians, rich capitalists, and their paid minions have diabolically claimed. There are hundreds of books (Harvest of Empire just one) that go into detail about the deadly results of U.S. military and CIA involvement in Latin America. Government policies that hurt Latino/as have long been the norm—such as the U.S. embargo of Cuba that continues to stunt their economy. I would suspect that the signs of our militarized holy cross and germ-laden dollar are as abhorrent as ever to countless Latin Americans and Puerto Ricans.

I am beginning to understand how Cuba’s Communism and Puerto Rico’s Democracy have been shaped by U.S. overt and covert actions. It is more obvious than ever that both Cuba and Puerto Rico are, indeed, two wings of the same vulture. They appear to be perfect little examples of our global future of dehumanization and expendability. Baby, yes, the sky is indeed falling. The center stopped holding two world-wars ago. I wonder what current ran through the bodies of Japanese-Americans after atomic bombs were dropped on Hiroshima and Nagasaki? Do you ever wonder what current runs through your body?