After reading about Trump’s proposed 2018 federal budget for discretionary expenditures, I wanted to laugh but simply couldn’t. Currently, the U.S. is number one in the world in military spending, spending more than the next seven countries combined! We spend approximately 611 billion a year, not counting over 40 billion on homeland security; China, at number two on the list, spends 215 billion; Russia, our big bad cold war rival, spends 70 billion. Research for yourselves the billions in U.S. Military aid given to foreign countries so they can buy U.S. made weapons to use on each other; half these countries can afford to sustain their own war machinery. Yet, we are cutting education, arts, environmental protection budgets, and a host of social service programs for the young and old. I still want to laugh. The value of gallows humor shouldn’t be overlooked—especially if the noose seems to be tightening around our naïve freely delivered necks. If only I were a good stand-up comic and could do something with this material: I, like my poetry, am so inadequate right now. Perhaps in my next life: you’ll be able to catch me on the Dystopian Comedy Central Channel; or, if I really have skills, on an HBO Apocalypse Death Jam Special. I’m sure the best bunkers around the country will have cable. 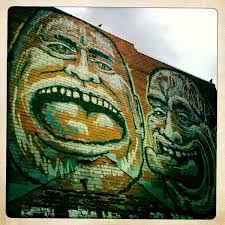 Hear the Laughter of an 8-Year-Old Boy