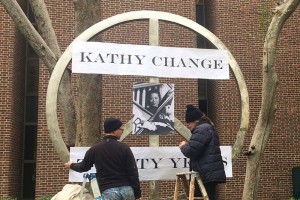 Kathy Who Set Herself Afire 20 Years Ago Remembered at Penn. Philadelphia Inquirer

Yesterday’s commemoration was arranged by Anita King and other friends of Kathy. I never met Kathy, so wish I could have stayed longer and heard more. She was a complex person, led a complicated life, and delivered prophetic and revolutionary messages. She was a visionary. She was a writer. She was an artist. She was an activist. She was…you decide. Soomi Kim and Susan Takahashi’s play, Chang(e), was an extraordinary artistic rendering of her life and deserves a revival; it’s important to keep in mind that this play offers only one interpretation of Kathy and her work. It would be wonderful to see some books or movies based on her life. I, like Anita has expressed, want to be careful with Kathy’s legacy. Below are attempts at approaching her with two poems written twenty years apart. I can’t help wanting to know all that I can about Kathy: that’s just me. For others, her beliefs and ideas are far more important. Some will dismiss her, for whatever reason(s). I simply hope as many people as possible come to learn about her. I hope to be at next year’s memorial; maybe you’ll also want to attend, even if it’s another rainy day and a little out of your way. 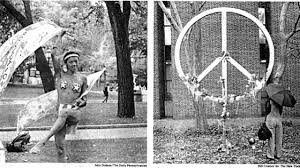 In the end the last birds
will be mocking birds.
R.B.

June 11, 1963.
On a busy South Vietnamese
street, a Buddhist monk
sat like charcoal in flames
smoke, palms together in
protest of religious persecution,
as bystanders watched.

Did you know his myth—Kathleen?
How his heart found whole
was placed in a shrine?
How The New York Times would
run your story?  Soon enough
find you more or less insane?

It was the picture of you
in a bathing suit
that first stopped me.

Fifteen years of waving protest flags,
of dancing stars & stripes bikini,
of yelling social transformation
manifesto on the grounds of Penn U.
She became a fixture there some said,
not attracting the crowds she once did.

Your sad eyes seemed to watch me
as I read—you danced as I read
strutted and kicked—perhaps calling
me sexist, perhaps not.

Why October 22nd of ’96?
Why Tuesday? Why choose
11:20 a.m. to walk across campus,
stand before sculptured peace
sign between two trees, pour
bucket of gasoline over your slim
build, and set yourself aflame?

In a letter she gave out
to local media and friends:
This is the tactically
correct move. I feel it with all
the weight of my soul.

Fifty witnesses watched,
as a university policeman tried
to smother the flames with his jacket,
but the flames started up again.

Sweet Kathleen, some said
you tried to dance.

By late afternoon
as light rain fell,
the peace sculpture wore
more than a dozen bouquets,
strands of beads,
and a poem that began:
Maybe she was crazy,
the girl said,
but I don’t think so. 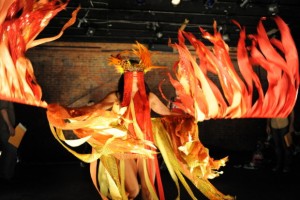 She Called Me Out

I do not trust myself: my first impulse is to romanticize and mythologize
Kathy; turn her into a world-changing metaphor: Monarch butterfly

who flapped her wings here, to create a storm, an earthquake, a revolution
over there, over time, passed when we are no longer here to believe in time.

What republic ever wants a martyr’s visionary legacy to stream ahead?
No matter inky blots on her wings, no one can tear them away from her:

she danced, fluttered, left in a ball of fire; now that spirit, sweet holy spirit,
has the run of the land. Have you ever felt her gently squeeze your shoulder,

her warm touch full of understanding and love; or has she gripped you
with her self-righteous anger? Here, my loose imagination takes over again.

I know only news reports: how jap, flat-face, chink struck her as a young girl,
a parents’ divorce, a slashed wrists’ response, a mother’s suicide, her divorce,

her overdosed cry, a father who dismissed a begging call; how she needed
love, understanding, to launch a revolution…looked at her death as her birth.

I had to own her children’s book, The Iron Moonhunter; see all her writing;
see no matter what I read, who I speak with, she will always remain a mystery.

So this fantasy: she wants me to keep writing these poems and standing in
public spaces sounding an alarm: we are killing ourselves without reason.

We have been positioned for slaughter by psychopathic adolescent boys
who boil us alive; old story: rule in hell rather than serve in heaven; strategy:

make us duck and cover. It is amazing some were upset Kathy made them
watch her burn that day; how some complained it was so selfish of her.

Until next time,
Keep writing,